Omar Khayyam never got married and didn’t have any children. He was a tall man with a big head, quiet and recluse.

A genius who was able to read a full book and memorize it right away.

Omar was a fan of Avicenna, the Persian Polymath, and in his notes named him as his teacher and mentor. Khayyam translated one of Avicenna’s Arabic treatise about Monotheism to Farsi. In the end, Khayyam left 13 treatises.

In one of his treatises, he has a geometric solution for a cubic equation that Will Durant names a masterpiece of mathematics in the Middle Ages. One of Khayyam’s students, Hamedani, became a great poet, judge, and Gnostic who was killed because of his beliefs in philosophy.

All of Hamedani’s theories have been proven thus far. The death of Hamedani was a trigger for Khayyam to start writing his book of poetry. King Seljuk was the king at the time. King Seljuk loved poetry and always cared about fun and amusement in his kingdom, so he paid 10,000 gold coins annually to Khayyam to complete his book.

In the year of 1089, the king who was very fond of his work asked Khayyam and other scientists to correct the calendar. This improved calendar was named “Jalali’s Calendar” and is still the most accurate measure of time in the world.

When he passed, Khayyam was buried in the city of Neishaboor in Iran in his own garden, which is now a tourist attraction.

Hundreds of years later, Edward Fitz Gerard translated “Rubaiyat of Omar Khayyam” to English in 1859. This book is still one of the most important contributors to English literature, and many of its hemstitches are used as proverbial up to now. 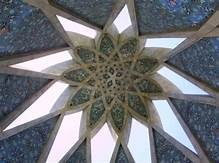 NASA named a little planet after Khayyam. Many famous people in history were a fan of Khayyam’s poetry book “Rubaiyat Khayyam”. Martin Luther King mentioned that he read Khayyam before going to sleep. Mark Twain always carried a Khayyam’s book with him. And many other writers wrote many great things about the legendary Khayyam.